It has not been easy for women’s voices to be heard, especially in areas of power or in the workplace.

Journalists, politicians, women in podcasts and the media, women publishing books, articles, making films, series… Fortunately, (although not in all countries or cultures equally) more and more women are occupying a place in public discourse, The road to leadership positions has been long. In this article we wanted to draw a brief history of how women’s voices began to be heard in professional environments.

The case of the ignored Miss Triggs

“That’s an excellent suggestion, Miss Triggs. Perhaps one of your colleagues here would like to make it“. This is the text accompanying the famous cartoon by illustrator Riana Duncan. In the image we can see a meeting room where a woman, the aforementioned Miss Triggs, is seated with four men in suits around a large table in what we can imagine to be a company meeting room.

I’m sure the situation is familiar to more than one of you. A woman proposes an idea and is ignored. After a while, one of her colleagues comes up with the same idea and is praised by the rest. It describes a situation in which a man appropriates a woman’s unnoticed ideas, opinions or comments, while he receives praise and congratulations for expressing exactly the same thing. 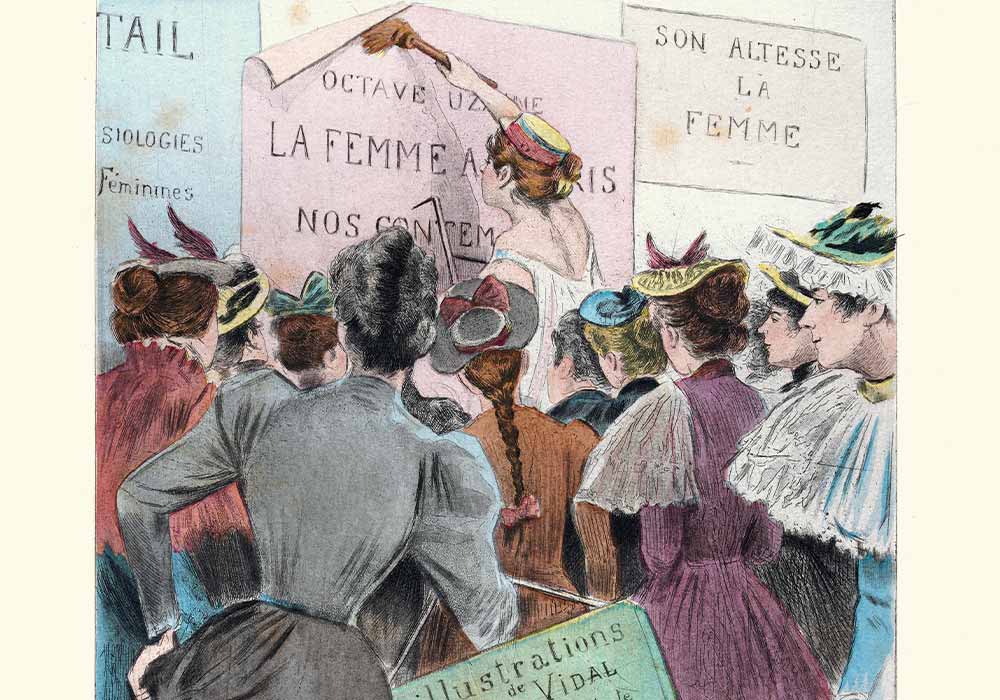 The Silence of Women in Ancient Times

The first documented instance of a man shushing a woman was in Homer’s “Odyssey”, almost three thousand years ago. This epic account of the adventures of Ulysses includes a scene in which Telemachus, son of the protagonist and Penelope, tells his mother: “Go inside the house and do your own work (…). The story will be in the care of men, and above all in my care. It is mine, therefore, to rule the house”.

This is the first example given by Mary Beard in her book “Women and power, a manifesto”. With it, she illustrates how long-standing is this habit in Western culture of silencing women’s voices in the public sphere. The author attempts to highlight the complicated relationship that has existed (and still exists) between women’s voices and the space of discourse and debate.

In the early 4th century BC. Aristophanes devoted an entire comedy to the fantasy that women could rule. The joke was based on the idea that women could not speak properly in public, that they could not attain the lofty language of male politics. In Roman mythology we find the case of Io, whom Jupiter turned into a cow so that she could only moo and not speak.

Public discourse and public speaking defined masculinity as a gender and were therefore practices to which women could not have access.

From the 1st century AD we have hardly any examples of women having a voice in public forums. And those that do come down to us are striking for the description that accompanies them. One was Mesia, who defended herself in court and “because she had a genuine masculine nature behind her female appearance, she was nicknamed the androgynous”, writes Beard. Another was Afrania, who was so “brazen” that, when she intervened, her statements were described as “barking” or “growling”.

As the book reports, at the time it was even stated that: “a woman should modestly refrain from expressing her voice in front of strangers in the same way that she would refrain from taking off her clothes”. The author says that public speech and oratory, the real driving and influencing threads in the public role of the characters, defined masculinity as a gender and were therefore practices to which women could not have access.

Throughout history, there have been repeated events in which women’s voices have been silenced. Perhaps one of the most notable is that of Olympe de Gouges who, in the midst of the French Revolution, wrote her famous Declaration of the Rights of Woman and the  Female Citizen. “Women have the right to mount the scaffold, they must also have the right to mount the speaker’s rostrum,” de Gouges demanded.

When the Jacobins banned expressions of dissent, she refused to remain silent, risking her life. In fact, the authorities arrested her on charges of sedition, and the revolutionary court sentenced her to death.

What can women talk about?

If we look for women’s contributions to the best speeches in history, we find that most of them – from Emmeline Pankhurst to Hillary Clinton – deal with women’s issues or problems. As if women can speak exclusively in public only to talk about what impacts them as a gender or as victims.

There is resistance to female intrusion into traditionally male discursive territory. As was the case when football player Jacqui Oatlley left the pitch to become the first female commentator on Match of the Day.

Steve Curry, a ‘Daily Mail’ journalist, who declared that “a woman commentating on football is abhorrent, it’s an insult; Oatley’s excited voice sounds like a fireman’s siren”.

Beard points out that these prejudices are deeply ingrained in us. Not in our brains but in our culture, in our language and in the millennia of our history.

What prejudices or processes prevent women from being heard?

The issue of voice is not a trivial one. Former British Prime Minister Margaret Thatcher hired a voice coach to transform her voice to achieve a more authoritative tone. Joey Cheng, a psychology professor and researcher at the University of Illinois (USA), proved in a 2016 study that people who spoke in a deeper tone of voice were considered more capable and dominant, with greater influence over others.

The business communication expert Teresa Baró details in the book “Unstoppable” the keys for women to gain visibility and be heard in the workplace, starting with work meetings. “Our discreet way of speaking, the one we adopt so as not to disturb, to be polite and pleasant, modest and empathetic, has the frustrating reward of seeing how they ignore us, how they snatch away our turn to speak or how they mask our ideas with more powerful voices and then pronounce them as their own”, says Baró in the pages of her book.

The aim is not for women to act as men do. Nor should we fall back on statements such as “after all, men and women speak different languages”. If they do, it’s because they have been taught to communicate differently.

If we’re to make real progress on Ms Triggs’ issue, we need to be sensitised to what we mean by the voice of authority and how we’ve come to believe it. Our mental model of the powerful person remains irrevocably male. “If we do not perceive that women are fully within the structures of power, then it is power, not women, that we need to redefine,” writes Beard. If we don’t listen to women’s voices, we are missing half the story.