The harms of excessive paper use are obvious, but the benefits of making your office paperless go beyond the ecological footprint.

When it comes to listing the changes that teleworking has brought to the business world, improving work-life balance, making working hours more flexible and reducing absenteeism are always at the top of the list. However, there are other group dynamics that have had to be modified and that bring benefits that are less obvious at first glance, but just as important. Such is the case of the paperless phenomenon, whose meaning is as obvious as it seems: less paper use.

What company hasn’t implemented cloud platforms in their day-to-day work during the pandemic? Its application has helped teams to work online, editing and completing the same files as if they were sharing a single space, but in this case, digital and not physical. This has removed the automatism of printing multiple copies of each document, which seemed non-negotiable, but in many cases unnecessary. 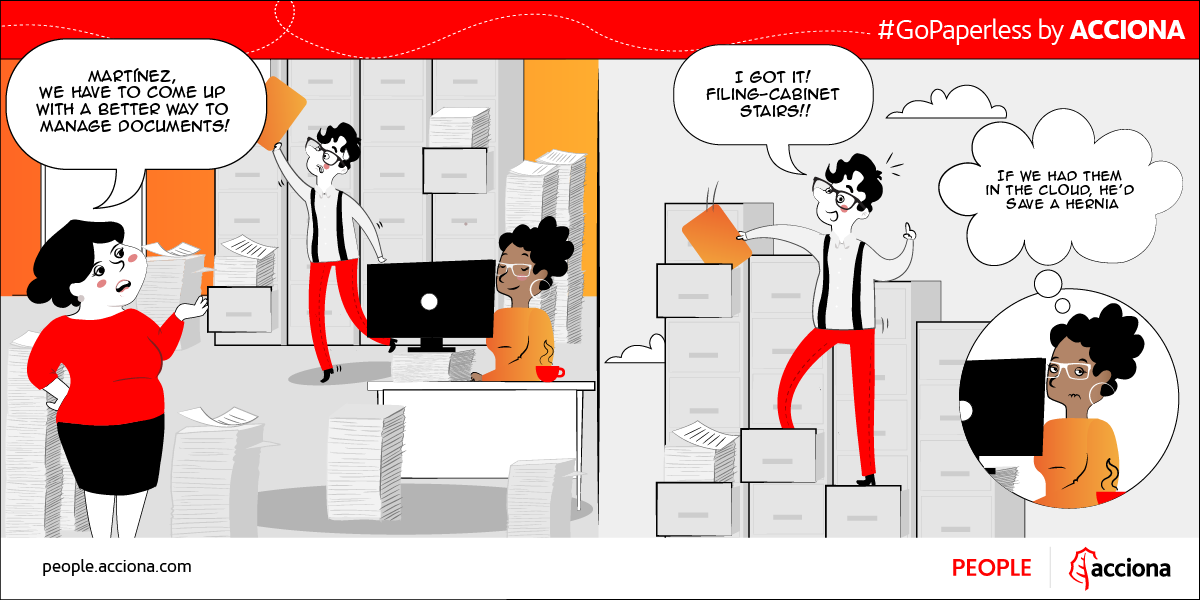 Without realising it, in addition to the significant reduction in paper printing costs for companies, this change in routine has also served to both mitigate the human ecological footprint on the planet and to increase labour efficiency.

Consequences of too much paper in offices

The calculations are simple, but the result is staggering. In a The Guardian study on paper consumption in offices, it is stated that each employee consumes 16 sheets of paper per day. A figure that shows that the use of personal computers and peripherals has not only not helped to reduce consumption, but has even increased paper waste.

Considering that it takes up to 10 litres of water on average to produce one sheet of paper, the ecological bill is skyrocketing. This is too high a cost since, according to the World Health Organisation (WHO), an average of 100 litres of water per day per person meets basic consumption and hygiene needs. In other words, the amount of water needed by three people is being used to cover the production of paper used by two employees. No more data should be needed to awaken our conscience.

When paper use is unavoidable

With the paperless model, no one is talking about putting an absolute end to the use of paper. The written word is a human characteristic that has been handed down from the earliest cultures. Stone engravings gave way to wax tablets, then to papyrus and then to parchment. It has not even succumbed to the advent of the technological age. In fact, some of the papers generated in certain departments of companies are non-negotiable due to their legal nature, but the truth is that a simple reflection before hitting the “print” button on whether it is really necessary to do so, can help to take care of the world we live in.

From the initial consideration of what we print and what we don’t, there’s inevitably another part that, although at first glance it may not seem so, also determines how paperless we are: the way we print. A decision that is sometimes as perplexing as printing in colour or black and white determines whether that document is more or less easy to recycle. Colour printing is at least four times more expensive for a document with the same amount of ink on the page, and more polluting. As a curiosity, “the most expensive and polluting colour is green as it is the one that requires the most complex materials for its manufacture”. But, undoubtedly, any of the coloured inks is more polluting than black and white inks, as they require components (dyes) that are highly harmful to nature, in addition to the usual ink polymer.

Productivity in a paperless office

Going paperless means automating workflows, increasing document security and improving employee efficiency. The constraints of editing and completing different materials in simultaneous collaboration systems lighten the pace of work. Each modification is made on a new version, so it is impossible to lose any changes or to step on any of the previous versions. It sounds convoluted but the result is crystal clear.

21% of daily productivity issues is due to problems with documentation. And the average time spent in each office finding files is as much as 18 minutes a day.

Not to mention indirect savings such as petrol for courier services or, again, time because of the immediacy of sending virtual documents instead of physical ones.

Another benefit of going paperless in the office is the space saved in the warehouse. The price per square metre is the same whether it’s occupied by one employee or a tower of files. The space freed up can be used to expand part of the office or be transformed into recreational areas for the team.

Technology components and office equipment manufacturer Kyocera has calculated that this transformation saves up to 117 euros yearly per employee. For a large company with 500 employees, according to their estimate, getting rid of these paper-based processes provides an annual saving of 58,500 euros. On top of that, switching from physical to digital storage leads to better traceability of documentation by knowing at all times who is accessing or changing a file and when.

Moreover, this transition to the paperless model can entail an exponential change: if I reduce, I somehow “force” or at least incentivise my suppliers to do the same. And it also affects safety. A fire or a flood can ruin thousands of hours of work, while in the cloud everything can be cryptographed, and regular backups mean that the best version is always at hand in an infinitely more secure way: 47% of data leaks are due to human error, such as lost or mismanaged documents .

From a personal standpoint, delimited by one’s desk, paper is an unquestionable element on the basis of its usefulness and the imperceptible impact that a few sheets of paper can have. But it’s when we zoom out and look at the macro-level figures that we realise the consequences of the production of all that paper. The negative impact on the sustainability of the planet, the outlay that weighs down companies’ finances and the efficiency of employees. That’s when we realise that a paperless world is increasingly necessary and urgent.