But this browser is not supported.

On-the-rise skills that every employee should develop

On-the-rise skills that every employee should develop

If the three industrial revolutions experienced by Humanity -the steam machine, in the late 18th century, electricity and internal combustion, in the closing stages of the 19th century, and computing technologies in the mid-20th century- have had something in common, that was the adaptive capacity of people to the new economic ecosystems emerging. The key to survival in this sort of “natural selection” regarding work environments is what in 1973 David C. McClelland coined as “professional competences”, which are some of the cornerstones of the concurrence in the business sector.

We are currently heading towards the prologue of the fourth industrial revolution, which is progressing at a frenzied pace through the confluence of artificial intelligence, the impact of social media on the economic activity, mobile technologies, data science and the “Internet of Things”. Everything altogether will lead to a paradigm shift with respect to professional competences. And it won’t take long: 35% of the skills demanded by employers are expected to change by 2020.

In other words, core skills such as leadership, communication, collaboration and time management will be still relevant, but companies will also value some others of technical nature, like programming, or even non-technical, like the capability and disposition of employees to keep on learning (“learning curve”).

Among those who dared to specify and give name to these future but imminent new professional competences is the University of Phoenix, whose Institute for the Future has drawn up a decalogue of skills that will most certainly be in demand by the labour market over the next decade: 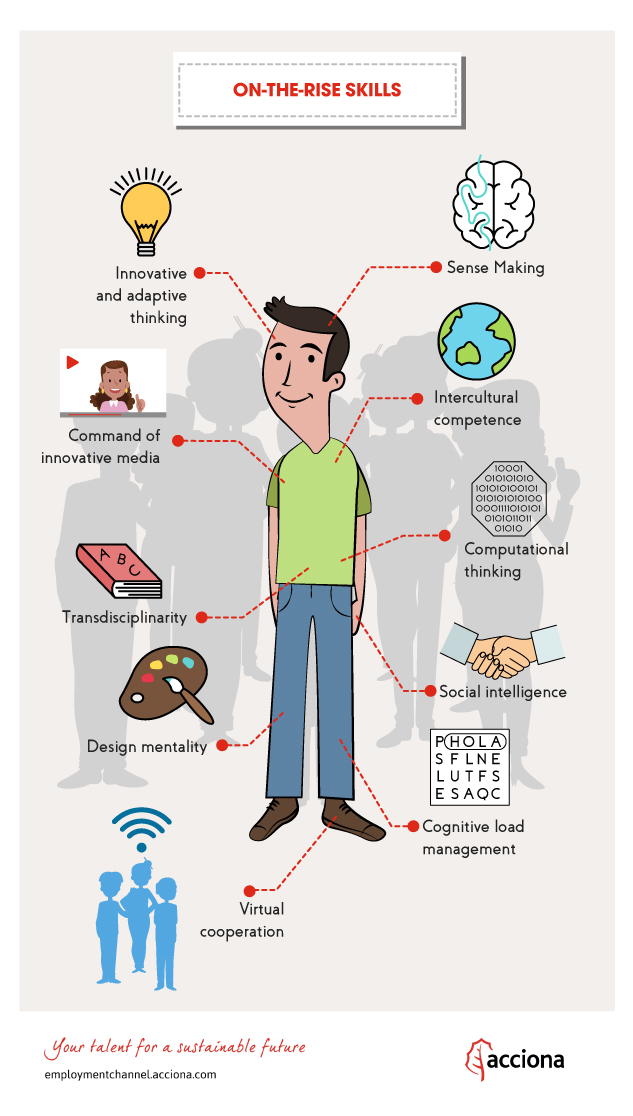 As may be seen, some of these professional competences on the rise are not so related to knowledge but to personality traits. Some others are skills that can be acquired from the early stages of education. In this sense, it should be noticed that, according to experts, most children currently in school will end up pursuing professions that don’t exist nowadays and that will require these new skills.